Anglo-Saxons liked to gather in the lord’s great hall, to eat and drink, and to listen to songs and stories. They loved tales about brave warriors and their adventures. A favourite story told how Beowulf, a heroic prince, kills the fierce man-eating monster Grendel, and Grendel’s equally horrid mother. The story of Beowulf was first written down in the 8th-9th centuries, but long before that the story was told around the fire. The storyteller played music to accompany the songs and poems, on a small harp or on another stringed instrument called a lyre. 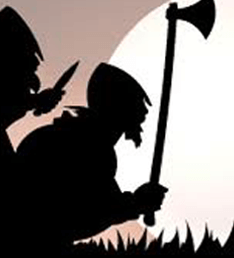 During the workshop you met a Viking. Where did the Vikings come from?

The Vikings came from three countries of Scandinavia: Denmark, Norway and Sweden. The name ‘Viking’ comes from a language called ‘Old Norse’ and means ‘a pirate raid’. People who went off raiding in ships were said to be ‘going Viking’.

The Viking age in European history was about AD 700 to 1100. During this period many Vikings left Scandinavia and travelled to other countries, such as Britain and Ireland. Some went to fight and steal treasure. Others settled in new lands as farmers, craftsmen or traders.

Southern Britain (England) had been settled by the Anglo-Saxons. In AD 787 three Viking Longships landed in southern England. The Vikings fought the local people, then sailed away. This first raid is recorded in the Anglos-Saxon Chronicles. It was the start of a fierce struggle between English and Vikings. The English called the Viking invaders ‘Danes’ but they came from Norway as well as Denmark.

Norwegian Vikings or ‘Norse’ sailed to Scotland, where they made settlements in the north and on the Orkney and Shetland islands. Vikings also settled on the Isle of Man. Vikings raided Wales, but few made homes there.

In 793 Vikings attacked the Christian monastery at Lindisfarne in Northumbria. They were pagans not Christians like most people in Britain. A Viking robber did not think twice about robbing a Christian church. Christian monasteries in Britain were easy to attack, because the monks in the monasteries had no weapons. Churches and monasteries kept valuable treasures, such as gold, jewels and books. There were food, drink, cattle, clothes and tools too – tempting for greedy Vikings.

Some Viking ships brought families to Britain looking for land to farm. Good farmland was scarce in the Vikings’ own countries. The parts of Britain where most Vikings settled were northern Scotland and eastern England. For 500 years, from about AD 900, Vikings ruled the north of Scotland, the Orkney and Shetland isles and the Hebrides islands off the west coast. In Ireland, Vikings founded the city of Dublin. Viking areas in east and northern England became known as the Danelaw Viking settlements brought new words into the English language, and new ideas about government too. For a short time England had Danish kings (King Cnut and his sons, from 1016 to 1042).Norwegian Vikings sailed west across the Atlantic Ocean to Iceland and Greenland.

About AD 1000, Vikings sailed to North America and started a settlement though it did not last long. Danish Vikings went to France and founded Normandy (‘Land of the North-men’). Danish Vikings also sailed south around Spain, and into the Mediterranean Sea.